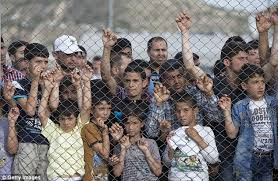 In 2016, nearly 66 million people were forced to leave their homes due to conflict and persecution – one of every 113 people on the planet. When displaced people cross international borders, they are called refugees. In 2016, the number of refugees reached an all-time high of 22 million people. 17 million of them are under the protection of the UNHCR – The UN Refugee Agency.

The Refugee Project allows for map-based exploration of refugee migrations over time. UNHCR data is complemented by original histories of the major refugee crises of the last half-century.
Refugees are people just like you. The difference is they have been forced to flee their homes.The numbers of people fleeing their home, their country, has accelerated to a level never seen before. In the past five years no fewer than 15 conflicts – some new, some old – have brought unspeakable tragedy and misery to millions across the world.

The Syrian refugee crisis is unprecedented. Hundreds of thousands of civilians have lost their lives. Entire cities have been reduced to rubble. Homes, hospitals, and schools have all come under attack. Half of Syria’s pre-war population – more than 11 million people – have been killed, injured, or forced to flee. More than 4 million Syrians have registered, or are waiting to register, with the United Nations High Commissioner for Refugees. Huge numbers are now in Jordan, Lebanon, Egypt, Turkey, and Iraq. Lebanon alone, a country with its own problems, hosts about 1.2 million refugees from Syria. Meaning one in every four people in Lebanon is now a Syrian refugee.

The plight of refugees in the camps is dire. Violence, illness, and malnutrition are prevalent. Syrian children have endured years of deprivation and displacement – they have known nothing but war. Adolescents have been raised amid continuous conflict. There are 13 million children deprived of education as a result of conflict in the region, and many of them live in these camps. As one policy expert put it: “Destabilization will come when you have a generation of children growing up in an environment where there is no education or social support.”